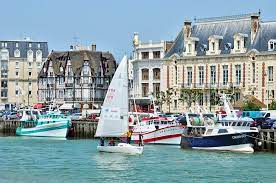 Imagine charming towns with gorgeous architecture, ancient harbors and historical beaches, magnificent white cliffs and delicious oysters. Then you will have a vivid picture of Normandy, the beautiful region in northwestern France full of culture, breathtaking landscapes and long-standing maritime traditions.

Here are my top picks for Normandy’s most interesting and beautiful sights.

Mont Saint-Michel, the country’s most famous Benedictine abbey and one of France’s most iconic images, is off the coast in Lower Normandy. This remarkable Gothic structure, perched on a small rocky island with its bay, fortifications and tiny medieval village, is a UNESCO World Heritage Site. It is also the most visited French monument outside of Paris.

Although the climb up to the top is not easy, the stunning maze of cloisters and twisting staircases, gardens and ramparts, and the breathtaking views from the top, make it worth it.

Honfleur, a charming town in Lower Normandy, is full of history, art, and charming maritime traditions. It is known for its charming port, lined with tall, narrow houses dating back to the 16th,17th, and 18th centuries.

The beauty of Honfleur was captured over time by illustrious artists like Gustave Courbet and Eugene Boudin. They also created paintings such as Monet, Johan Jongkind, and Monet. This artistic movement is the foundation of Impressionism.

Today, Honfleur is a charming getaway for art lovers, with many of its cultural and artistic heritage preserved in its museums and galleries. This charming seaside town is not only known for its culture. Particularly attractive are the Church of Saint-Catherine, France’s largest wooden church, the beaches and picturesque lanes full of chic boutiques and gourmet eateries.

Monet’s House in Giverny and Gardens

Monet’s charming House & Gardens can be found in Giverny (Haute Normandy), just one hour from Paris.

In 1890, the famous impressionist painter Monet bought the house and made it his paradise. He spent almost 43 years living in and working in this haven of peace and nature. The magnificent property that inspired many of Monet’s paintings was turned into a museum at the end of the 19th century. It is now a popular tourist attraction for nature lovers and Monet fans.

Rouen is often called the historic capital of Normandy, France’s museum city, and boasts an extraordinary history. It also features some truly magnificent medieval architecture and offers many attractions. The city’s most popular sights include the breathtaking Gothic churches.

Rouen is the home of Gustave Flaubert and where Joan of Arc was executed. It has a lot to offer. It is home to the stunning Rouen Cathedral (Cathedrale Notre-Dame de Rouen), a masterpiece of Monet. The iconic Gros Horloge (Great Clock) was also painted. The beautiful Old Town also has its half-timbered houses and paved streets. And there’s the Musee des Beaux-Arts.

Trouville and Deauville, two cities that are quite different but equally charming, are must-sees for anyone who wants to experience the real Normandy.

Trouville sur Mer is described by Normandie tourism as a “country by the sea” and offers a unique combination of art, beaches, and Belle Epoque charm making it an ideal destination for families. Its glamorous neighbor, Deauville, attracts tourists with its fancy events and glamour. Deauville is the home of the American Film Festival and the Deauville–La Touques Racecourse. This area is also known for its exceptional horse culture.

It is impossible to say that Normandy has given you a true taste until you have seen the charming villages, farms, and orchards along its Cider Route. It is truly an amazing experience. The epicurean journey takes you through Pays d’Auge’s picturesque countryside, featuring charming villages and renowned cider & calvados makers.

The main destinations along the 40 km circular route are Cambremer and Beaufour, Bonnebosq and Duval.

Normandy’s D-day beaches, the scene of Operation Overlord and a major attraction within the region, are undoubtedly one of France’s most significant historic sites.

The area, which stretches along the English Channel, includes the beaches of Utah and Omaha, Juno and Gold, and the surrounding cities. It is an area of exceptional importance in France’s history and continental Europe. It consists of nearly 50 miles of the French coastline, dotted with impressive museums, monuments and cemeteries.

Highlights include Caen’s Museum for Peace, where you can learn more about the Nazi occupation of France during World War II; Musee du Debarquement dedicated to the Battle of Normandy; Colleville’s outstanding Normandy American Cemetery; and Pointe du Hoc Ranger Monument, which is where the United States Army Ranger Assault Group attacked German troops during Operation Overlord.