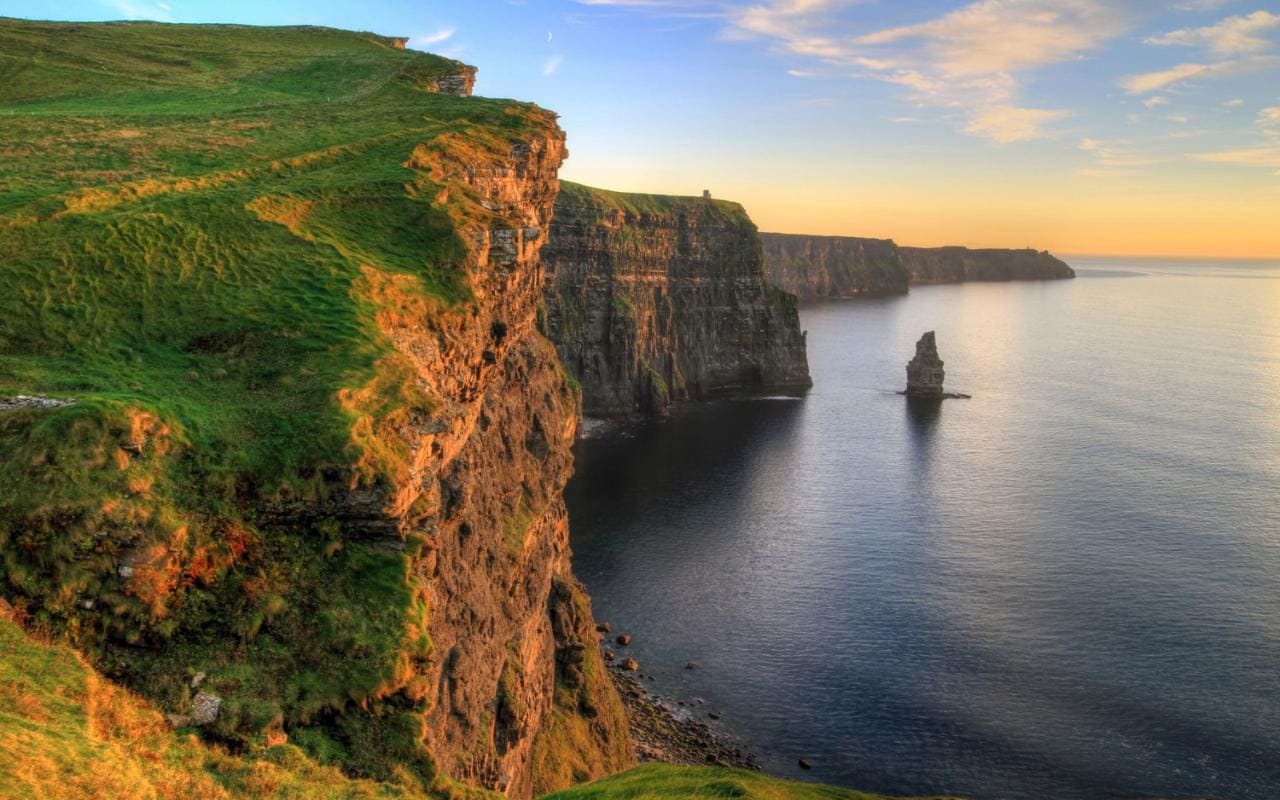 Ireland (Éire in Irish) is a member of the European Union, which occupies most of the island of the same name.

It has three of the four historic provinces: Leinster (Irish: Laighin), Connacht (Irish: Connacht), and Munster (Irish: An Mhumhain). Ulster (Irish: Cúige Uladh), known as Northern Ireland is part of the United Kingdom. Its capital is Dublin (Irish: Baile Átha Cliath). In 1949 the Irish state was declared as the Republic of Ireland (Poblacht na hÉireann in Irish). 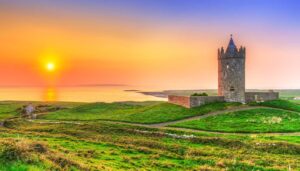 The Republic of Ireland offers a lively capital, castles, meadows, woods, beer, cliffs and lots of rain. Dublin will delight those who want to go out at night to have fun, but also those who prefer to shop, visit museums or go to the theater. Outside the cities, the green Irish fields are littered with castles, monasteries, streams and forests that seem to be taken from a story. In the field or in the city, the Irish, always willing to chat while sipping a pint of beer, is another of the attractions of a trip to Ireland, since their affability to make the visitors feel at home from day one.

Language
The official languages are Irish (Gaeilge), the native Celtic language, and English, which is constitutionally described as a secondary official language. Learning Irish is compulsory in education, but English is widely prevalent. Public signs are usually bilingual and there are also national media in Irish. The population belonging to predominantly Irish speaking communities (the Gaeltacht) are limited to only a few tens of thousands in isolated pockets, mainly to the west coast

Religion
The Republic of Ireland is officially a Roman Catholic 86.8%, religion introduced by St. Patrick.

Visas for Ireland
To travel to Ireland, citizens of the following countries do not require visas to stay less than 90 days: Argentina, Bolivia, Chile, Costa Rica, El Salvador, Spain, Guatemala, Honduras, Mexico, Panama, Paraguay, Uruguay and Venezuela. Citizens of the European Union only have to show their ID card to enter the country. Vaccination for Ireland
There are no compulsory vaccinations or special health recommendations for a vacation in Ireland.

Health Conditions
Ireland is considered a great and clean destination. You will find no problems in eating and drinking.

Natural Disasters
There are no significant risks to travel to Ireland.

Traveling with children to Ireland
Ireland is a suitable destination to travel with children. Ireland offers a wealth of opportunities for family enjoyment. In the capital, Dublin, it is worth to do the Viking Splash Tours or to visit the Aquatic Park. A beautiful region to explore with children is County Kerry, with its beaches, hills, lakes and monasteries.

Climate
The climate is typically insular and warm nature, as a result of the moderately moist winds from the Atlantic, avoiding extremes in temperature differences that are present in other regions of similar latitude. Precipitation falls throughout the year, but in general they are light, particularly east of the country. The West, however, tends to be wetter and prone to Atlantic storms, especially in the last months of autumn and winter, which occasionally bring destructive winds and most rainfall in these areas, and snow and hail. The prolonged snowfalls are rare, and tend to be confined to the northern half. In January and February, average temperatures range from 4 to 7 º C. The average maximum temperatures in July and August between 17 and 20 º C. The sea around Ireland is surprisingly warm due to the influence of the Gulf Stream. For more information, see the weather in Met Eireann

Recommended Clothing
It is recommended to bring light clothes during summer and  warmer ones for the winter. However, rainwear is advisable throughout the year.

Gastronomy
The Queen of Irish cuisine is the potato, which accompanies all dishes either fried, grilled, baked or cooked. The national dish is the Irish Stew, which is prepared with lamb, goat, onions, potatoes, turnips, carrots, and spices. It is essential to eat it accompanied by brown bread. As an island that is, fish is essential in the diet, and it is prepared in a thousand different ways. Fresh cheeses are delicious, as Milleens, St. Killian, Cashel Blue, and Ardraham. In Dublin, coddle is very popular, which is made with cooked pork sausage. In Ireland, Irish breakfast is really famous, which is served mostly with pork and fried potato.

One of the drinks associated with Ireland is Guinness, which is often served in pubs, but Smithwicks is also popular (which in Europe is generally known as Kilkenny). It is always present the Celtic tradition of drinking cider, as well as single malts and Irish coffee. Since 1974, Ireland produced one of the most famous liqueur, Baileys Irish Cream, consisting of a mixture of cream and Irish whiskey, the alcoholic content is 17% of the volume.

Schedules
The commercial time runs from Monday to Friday: 09:00 – 17:30 / 18:00, and shorter hours on Saturdays. Department stores are open on Thursday and Friday night. Some shops close for lunch. On Sundays, only grocers work, and newsagents in the morning. The regular office hours are Monday through Friday: 09:00 – 17:00.

The territory of Ireland is basically flat or wavy. The highest peaks are near the coast. The country is famous for the verdant meadows.

The shamrock is the national symbol of Ireland, and in fact covers much of their land.

The Irish economy has experienced in recent decades a dramatic shift that has taken her to have one of the highest per capita incomes on earth.

Irish (or Gaelic) is not dominant (as opposed to English) but it is studied and known for the public.

Get cheap flights to Dublin is very simple, there are many low cost airlines. However, the hotels and restaurants are not cheap, especially considering what they offer in return.

What to see and do in Ireland

In Ireland it is traditional to drink pints of stout with a good slice of bread with butter. The center of Dublin pubs are a great place to do it.

Visit the megalithic monument of Newgrange, in County Meath, declared a World Heritage Site by UNESCO.

Enjoy a few days visiting towns and castles of the more rural Ireland: Kilkenny, Cahir, Trim, Blarney, … Some of the most spectacular castles have been converted into hotels where one can feel like a noble of the Middle Ages.

If you do not mind the rain and cold in Ireland, cycling, fishing or hiking, are great activities for the most intrepid, enjoying beautiful landscapes, forests and wildlife.

Step through the crowded streets of Waterford. From the tower and walls, to the commercial port, this place will surprise visitors with its architectural heritage.