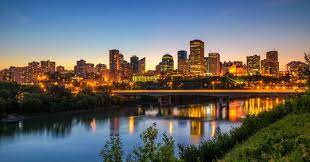 Edmonton is home to many museums and golf courses, the largest shopping mall in North America, and over 30 festivals every year. It’s easy to see why Edmonton is Canada’s top tourist destination.

The lively capital city of Alberta is also known as Canada’s Festival City. It offers plenty of things to do and see for everyone, from cultural vultures to outdoor enthusiasts.

Edmonton, the capital city of Alberta, also known as the City of Champions, has multiple summer festivals every few days from May until the end of September. Our winter festivals and events start in November and continue every week until the end of March. April is always filled with concerts and music festivals, and October is stock full of the same, plus Halloween events. There is always some attraction and event to take part in. And this isn’t counting any of the attractions or historical sites that are here year-round. But we’ll get to those in a second.

Edmonton’s North Saskatchewan River Valley has 20 parks and various attractions. It is 22 times bigger than Central Park in New York.

This incredible system of urban parks, which is undoubtedly the largest on the continent, features ravines, lakes and golf courses, ski slopes and multi-use trails. It’s a delight for anyone who loves to be outside.

Old Strathcona is another interesting spot in the city. It’s one of Edmonton’s most vibrant and bohemian districts. This area is full of cultural events, great bars and restaurants, art galleries and funky shops.

Old Strathcona, however, is a city that’s known for its art and entertainment hub. It has a vibrant independent theatre scene and an amazing selection of art-related boutiques.

The vibrant Whyte Avenue is where you will find the best shops, restaurants, bars and street performers.

You can taste Edmonton’s vibrant art and culture scene by visiting the Arts District. It has nice buildings and lively Churchill Square. Or you can visit the Royal Alberta Museum or the modern Art Gallery of Alberta.

The Ukrainian Cultural Heritage Village, an amazing open-air museum that tells stories of the Ukrainian immigrants who arrived in the area between 1892-1830, is equally attractive.

Edmonton is Canada’s Festival City. Here are some of the most popular events that occur here every year.

Edmonton International Fringe Theatre Festival is the oldest and most important fringe theatre festival on the continent. It takes place every August in the Old Strathcona District.

Edmonton Folk Music Festival is a four-day outdoor music festival that features everything folk, jazz, rock, and other worldbeat styles. It is held every August at Edmonton’s Gallagher Park.

A Taste of Edmonton is the city’s most renowned food festival. It takes place every June at the Winston Churchill Square.

Other festivals include the K-Days Parade, Edmonton International Street Performers Festival and Edmonton Pride Festival. Nextfest is a dynamic event that celebrates the city’s next-generation artists.